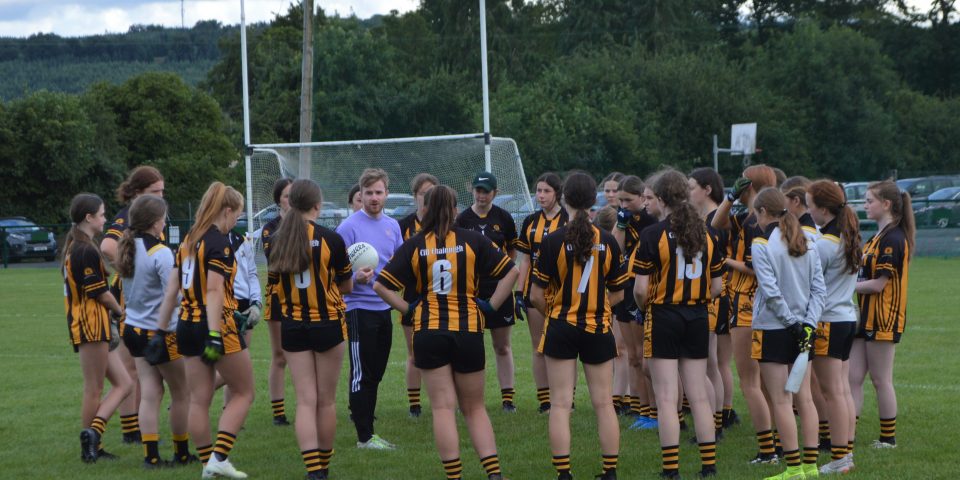 The U16s Kilkenny county squad are Leinster Runners Up after a most enthralling encounter against Louth Wednesday in Ballymore Eustace. This match was the epitome of the proverbial ‘game of two halves’ after an astonishing comeback by the cats after half time. The Kilkenny girls were the first to put a score on the board with a point almost immediately from throw in however Louth were quick to answer with a goal. The first half  then saw a Louth team that were clinical and composed in front of goals and the scores kept racking up. Despite kilkenny having their fair share of possession in this first half and managing to penetrate the Louth defence a number of times the outlook seemed quite bleak at half time with a scoreline of 5:8 to 1:3 in favour of the wee county.

With a 17 point gap, and the Kilkenny girls looking rattled,  spectators could have been forgiven for thinking things could only get worse…they were so wrong. No one expected, bar the management who know this group well, the third quarter streak of dominance and determination that brought Kilkenny back to within 4 points of Louth. Kilkenny manager Conor Gorey gave an insight into what was said at half time, “We asked the girls if they believed they could overturn a 17 point deficit and not one player hesitated in replying with a defiant ‘yes’. What followed was 13 unanswered points…”

The third quarter was an incredible display of heart and strength of character that showed clearly that the nerves of the first half had settled and Kilkenny had more than found their form and composure. Spectators witnessed a Kilkenny side that would not bow down…a Kilkenny team that stood up and were counted…a Kilkenny team that had supporters at the edge of their seats as they gradually and convincingly narrowed the gap. If it wasn’t for what must be the save of the tournament from the Louth keeper the gap would surely have been narrowed to 1 point. It wasn’t to be and the water break ensued and the final quarter saw the two sides equally contesting the ball with Louth getting on the scoreboard again and running out worthy winners with a final score of 6:11 to 4:11. Gorey remarks, “With Louth’s lead cut to 4 points, their goalkeeper made what can only be described as a world class save to deny us a certain goal. That save, combined with the water break stoppage, stemmed our momentum. It allowed Louth to regather and shut up shop to close out the game. All credit to Louth on a fantastic win”

Victory on the night may not have gone Kilkenny’s way but a marker has clearly been set for what Kilkenny sides are capable of and the experience of such a stage will go a long way in the development of these players. Gorey is quick to take the positives from the experience, “The first half was not a true reflection of the team’s collective ability but I think that was made very clear by their spectacular second half display. It was a team performance we are immensely proud of but most importantly, a performance that will lay the foundations for this team’s future success. This is a game that will stand to these young ladies for years to come ”

So it would seem that hard luck but equally well done can be attributed to this spirited group of players and the management team of Conor Gorey, John Gorey, Regina Moran and Martin Patterson.