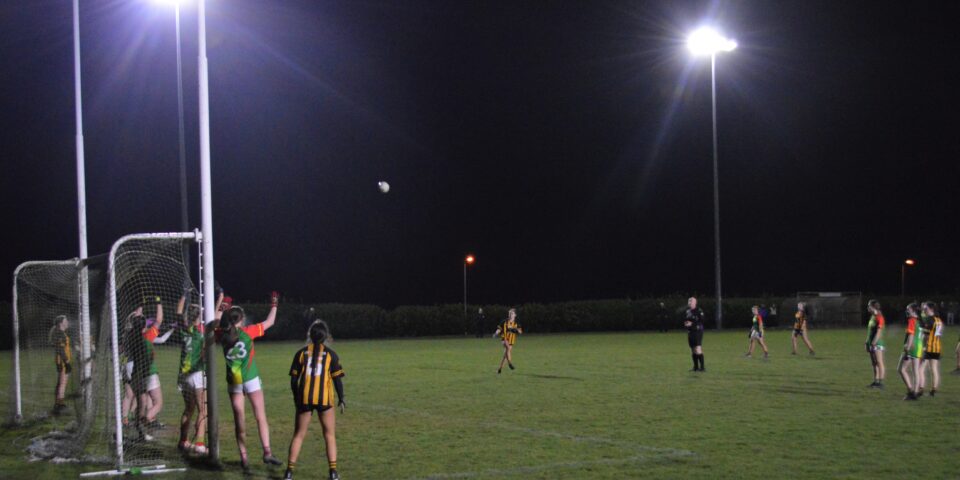 Leinster Championship Success for Kilkenny U16s in Round 1

It was an enthralling match in a cold Tinryland for the U16 C Round 1 clash between neighbours Kilkenny and Carlow. With 11 goals in total between them, 2 sin bins for Carlow and all square with minutes to go this was a match that had the spectators forgetting about the baltic conditions and transfixed on every play right up until referee Gearóid McGrath blew the final whistle. First on the score board was Carlow with a point after only one minute of play. Louisa Gilmore of Dunnamaggin responded shortly after and was the first to put a score on the board for Kilkenny with a great point from play. Freetaker Gilmore would go on to rack up a tally of 2-4 throughout the game with one goal from play and a well taken penalty shot.

With a point a piece it was Carlow who claimed the next point to once again take the lead, however not for long as Muckalee’s Shona Ruane replied quickly and kicked a powerful goal to put Kilkenny in the lead for the first time in the match ten minutes in. The next fifteen minutes the two sides battled hard each taking fine points. Kilkenny’s net was rattled twice by the Carlow offense while two goals from Gilmore and one from Callan’s Rachel Phelan kept Kilkenny to the fore. Some forceful defending from Carlow with just minutes to go to saw two players face the sin bin. This resulted in Kilkenny leading by 2 scores at half time facing into a third quarter with a depleted Carlow side for the bulk of ten minutes.

The third quarter was all about the defence for Carlow as they swarmed their goal area in a bid to make up for the 2 players down and do some damage control. The plan worked to an extent and despite an onslaught of attacks from Kilkenny they only managed 3 scores in this third quarter and at the second water break Kilkenny led by 7 points and Carlow were back to full strength.

Carlow came out on fire after the second water break and it was clear their tactics had changed from defense to offense. They scored 2 goals and a point within 5 minutes of the third quarter, with no reply from Kilkenny, to level the game.  Bláithin Holden was the sixth goal hero for Kilkenny with 7 minutes to go to reclaim the lead once again. However the lead was short lived as Carlow found the Kilkenny net and with minutes to go it was once all square and anybody’s  game. The Kilkenny side managed to keep their composure for these final crucial minutes and Gilmore kept her cool to score 2 points and see Kilkenny finish victorious by 2 points at the final whistle.

Kilkenny’s Pia Langton of Clara and Aoife Shealy of Kilkenny City both put in noteworthy performances in midfield and the back line respectively for Kilkenny today. Rachel Phelan and Shona Ruane are also deserving of special mentions in the forwards for their stellar efforts.

Well done to all the panel and management team of Conor Gorey, Regina Moran, Martin Patterson and John Gorey on a deserving win. Next up for this squad is Offaly in round 2 on March 19th.