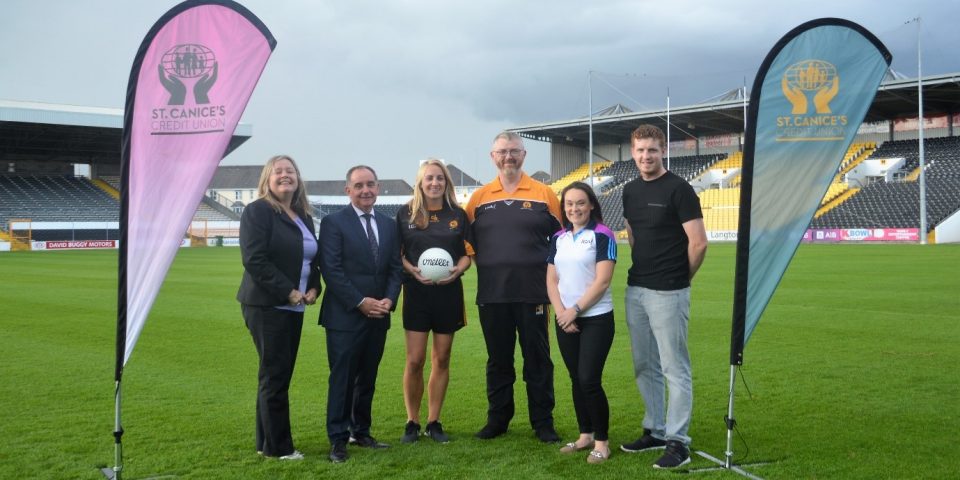 Ladies Football in Kilkenny has #serioussupport

Kilkenny LGFA have recently partnered up with St. Canices Credit Union as their main sponsor and developed a new website, www.kilkennyladiesgaelic.ie An event to announce this partnership and to launch their new website was held 28th August in Nowlan Park. Jackie Kealy of St Canices Credit Union stated that they were ‘delighted with the partnership with the LGFA as promoting sport has always been a huge part of our ethos.’ There are 10 LGFA clubs in Kilkenny and 11 Credit Unions showing how both organisations strive to reach out and be accessible to all communities.

Representatives from each of the ten clubs attended the event, ranging in ages from the nursery groups right up to the adult and non-competitive Mothers&others teams. Also present were St. Canices credit union. Intosport reps and Suzi Doyle the Leinster Ladies Games Development Officer. Suzi remarked how in Kilkenny ‘there is fantastic work going on at club level and the Kilkenny Ladies Football County Board is so positive and proactive.’
It’s an exciting time to be involved in female sport in the country and the importance of keeping women in sport…any sport, was a key message underlined by Kilkenny Chairperson Séan Ó hArgáin. He noted that ‘although we may not get the same media attention, support or fantastic success as the Camogie and Hurling in Kilkenny our #EffortisEqual and the multitude of females coaching and playing it in the county of Kilkenny absolutely love it.’

Ladies football is making huge strives in Kilkenny in numbers and success. There is super work being done all over the county and numbers have doubled in participation in recent years. One example of this growth in numbers would be Dunnamaggin LGFC, a rural club set up 5 years ago, that now has over 200 members! Many clubs like Muckalee LGFC, who didn’t previously, are now catering for the Nursery age group. Strives can also be seen in regards competitions. Kilkenny had 3 teams compete in National Féile competitions this year with Kilkenny City reaching semi final stage in Division 1 placing them in the top 4 U14s teams in the country. Dunnamaggin won their division 5 shield title and Erin’s Own contested very well in Division 7.

Railyard Ladies Football Club Camp 2019!!!Why are the Number of Female Ladies Gaelic Football Coaches in Kilkenny on the Rise?

Dunnamaggin v Kilkenny City - U16 League Roinn A Round 1

John Lockes v Clara - U16 League Roinn B Round 1

Muckalee v Piltown - U16 League Roinn A Round 1

Railyard v Tullogher Rosbercon - U16 League Roinn B Round 1

Kilkenny City Green v Piltown - U14 League Roinn A Round 2

Muckalee v Tullogher Rosbercon - U14 League Roinn B Round 2

Kilkenny City Navy v Thomastown - U14 League Roinn B Round 2

Railyard v Dunnamaggin - U14 League Roinn A Round 2